With the 2022/23 National League campaign almost with us, Non League Daily explored what two experimental sides containing players purely born in the North and South of England would look like. 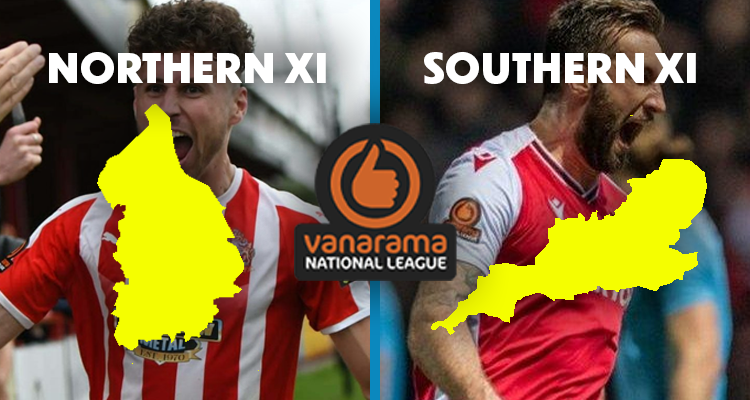 What would a National League Northern and Southern XI look like?

As we slowly grind through the month of June, those all too familiar non-league withdrawal symptoms are intensifying.

Unanimously regarded by football supporters as the dullest within the calendar year, it’s the period of time where fans begin to lap up any pre-season friendly announcements, kit releases or new signings, such is the desperation to punctuate the monotonous cycle.

Fear not, Non League Daily have you covered, as we attempt to answer the questions people have, or probably haven’t, been wondering.

? What’s the best kit released by a non-league club so far this summer?

We kick it off with the age-old debate regarding the North-South divide. On first glance in the National League, it looks as if the North has the upper hand, with the entire National League top seven from last season belonging to the former, coupled with how its promoted sides fare in comparison to their Southern counterparts.

But is that the truest reflection of the North-South divide in the National League? We don’t think so, and to try and answer the question, a hypothetical match has been created – presumably to be played in Saudi Arabia if the league’s organisational body have any say in it – comprising two teams of players born in the South and North.

West Ham’s London Stadium to host National League play off final. None of the league’s current top 7 are based within 100 miles. pic.twitter.com/nB53EZdfdO

So, here are some house rules. To avoid any controversy, Leicester is the designated starting point of the North. It’s not scientific and is up for debate, but it will do.

As for the player selection, we’ve chosen 22 National League stars, using the following stipulations: two English-born (irrespective of any alternate international allegiances) players per National League club are permitted, with whom they have to be contracted as of next weekend. All overall selections are entirely discretionary, instead of being determined by an objective ranking coefficient.

So without further ado… The Chorley-born Wrexham boss Phil Parkinson is given the honour of overseeing the Northern XI, having been the highest-ranking manager born in the North not to be promoted last season.

Pound for pound, Pete Wild would’ve had a strong case to be selected as manager, until his departure from FC Halifax Town to EFL side Barrow ruled him out of contention.

Barrow are delighted to unveil Pete Wild as the club’s new manager.#BarrowAFC

Talking of the Shaymen, their long-serving goalkeeper Sam Johnson is between the sticks, behind a backline of Ross Barrows (Altrincham), Kyle Cameron (Notts County), Callum Howe (Solihull Moors) and Jeff King (Chesterfield).

Despite their defensive attributes, the back four does pose a threat at the other end. In Barrows’ case, such positivity going forwards has earned him an interesting move from relegated King’s Lynn Town to Altrincham.

In central midfield, it wasn’t easy to find too many eligible candidates. James Jones of Wrexham alongside Dagenham & Redbridge’s Matt Robinson feels like the best partnership available, especially given the fact they’d compliment one another tidily too. Both possess great engines, while Jones’ ability to break up play would give Robinson licence to attack and display the creativity that has delivered almost double figures in goals across the past two seasons.

Further forward is where things in the Northern XI start to get interesting, as there’s an abundance of attacking talent boasting a cumulative tally of 71 goals last season. Joe Sbarra will roam slightly higher than the above-mentioned duo, shadowing the league’s most lucrative player in Paul Mullin.

? How about this for a view of Paul Mullin’s delightful chipped goal for Wrexham against Stockport County.

Either side of them are direct, tricky wingers Ryan Colclough and Callum Roberts, with the latter possessing that specific technical wizardry only ever associated with a left-footer.

So, on the surface a very competent outfit encompassing solidity, intelligence, flair and attacking ruthlessness, but the best way to assess it is in comparison to the Southern XI.

Read: What would a National League Central division look like? 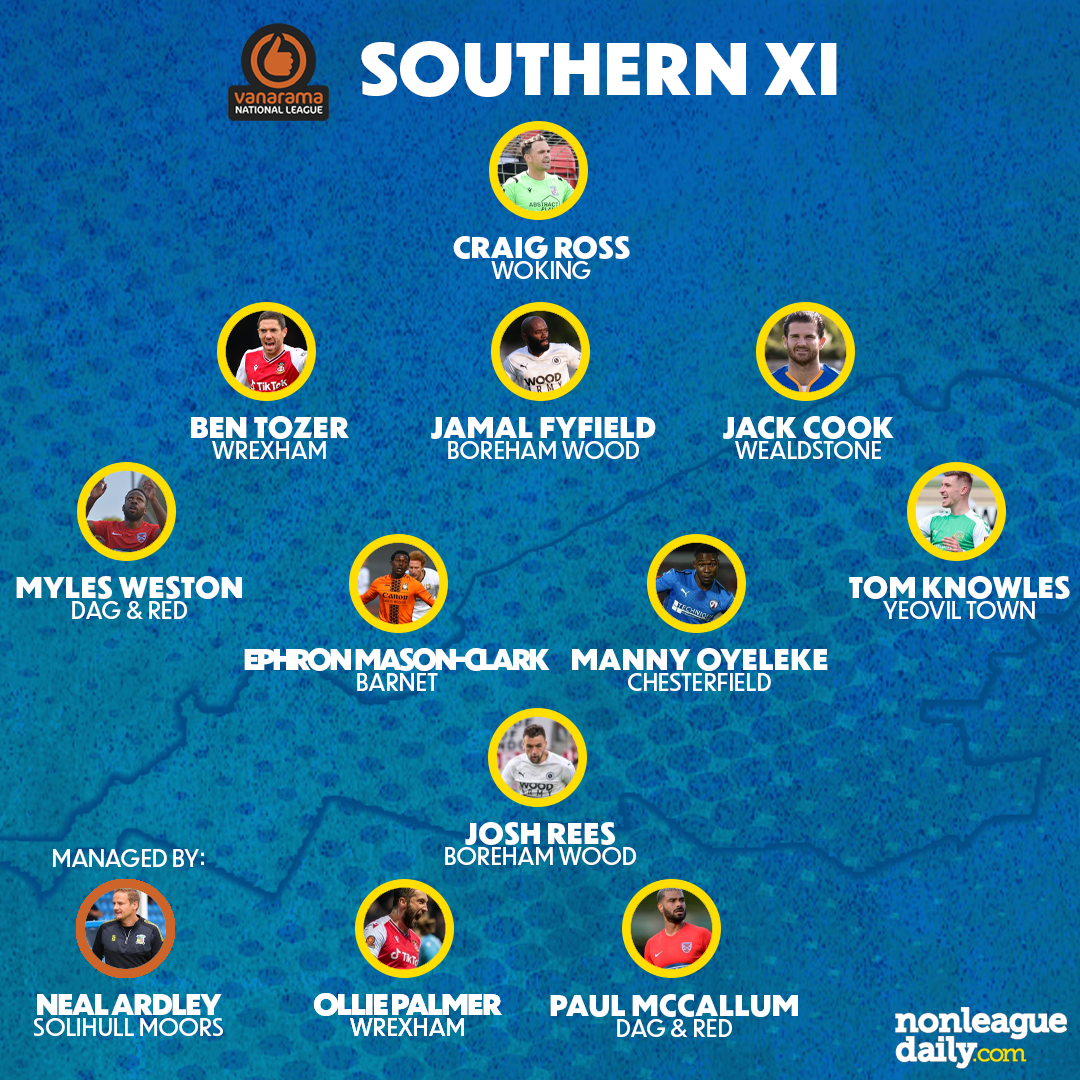 Neal Ardley is appointed to the dugout ahead of FA Trophy winner and only other real candidate Andy Woodman, and his team is structured in a 5-3-2 formation that hinges upon the wing-backs, namely Myles Weston of Dagenham and Yeovil’s Tom Knowles – the division’s most effective crosser and fouled player respectively from last season.

This will naturally place more of a burden upon the three centre-halves, but luckily Jamal Fyfield, Jack Cook and Ben Tozer are amongst the most dependent in the business. All aerially dominant, with Tozer of course possessing a particular unique long throw weapon that is incredibly tough to counteract.

This, as well as the above-mentioned production from out wide, would create endless opportunities for big-man strike partnership Paul McCallum and Ollie Palmer.

It’s been a month since this already ?

Onto the midfield, which has a nice balance of security and freedom. Manny Oyeleke, when temporarily free from the injury issues that have plagued his last two years, is a shoo-in capable of playing higher. The same could be said of his partner, Mason Ephron-Clark, who is still only 22 years old despite having seemingly been around for an age.

Slightly more advanced lies Josh Rees, one of the best ‘in the hole’ players within non-league, though his efforts often do go under the radar.

The final position to cover is arguably the most important: goalkeeper. Nobody really jumped out as an option, but the experienced Craig Ross of Woking is the ultimate safe pair of hands, from whom not many attackers would get much change.

Overall, an intriguing match-up between two well-balanced and equally talented sides, but who would prevail? That’s for you to decide.

Do you agree with our picks? Would you have preferred to see someone else involved? Who would come out on top in the game? Let us know on Twitter.